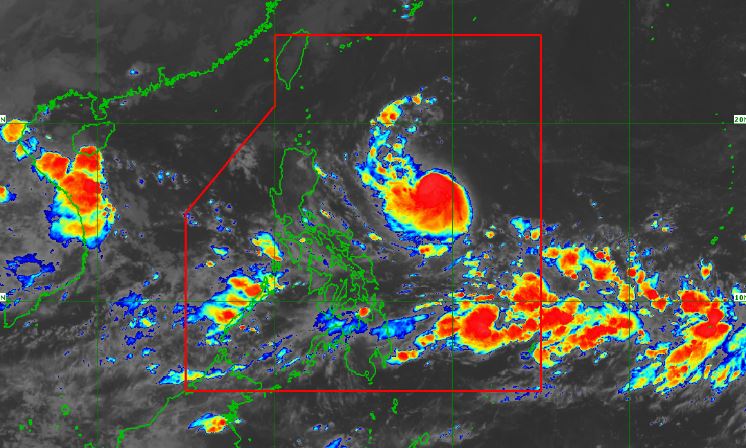 At 4:00 am today, the center of Tropical Storm ‘Karding’ was estimated based on all available data at 795 km East of Tuguegarao City, Cagayan.

‘Karding’ has maximum sustained winds of 85 km/h near the center, gustiness of up to 105 km/h, and central pressure of 994 hPa. It is moving west southwestward at 15 km/h.

Strong to gale-force winds extend outwards up to 220 km from the center.

Potential impacts of winds: Minimal to minor threat to life and property ‘Bagyong Karding’ is forecast to track generally west southwestward or westward while gradually accelerating towards the east coast of Isabela or Aurora, where it is likely to make landfall tomorrow morning or afternoon.

After crossing the mountainous terrain of Northern Luzon, the tropical cyclone is forecast to emerge over the West Philippine Sea tomorrow late evening or Monday early morning. ‘Karding’ will then continue tracking westward over the West Philippine Sea for the remainder of the forecast period.

This tropical cyclone is forecast to gradually intensify within the period prior to landfall over Northern Luzon. While current forecast scenario shows that ‘Karding’ may make landfall as a severe tropical storm, the possibility that this tropical cyclone will reach typhoon category shortly before reaching land is not ruled out. Frictional effects of the rugged terrain of Northern Luzon may result in some slight weakening, although ‘Karding’ will likely be at severe tropical storm category once it emerges over the West Philippine Sea.

Tonight through tomorrow early morning: Light to moderate with at times heavy rains over Batanes, Cagayan, Isabela, and the northern portion of Aurora.

Under these conditions, scattered flooding and rain-induced landslides are possible, especially in areas that are highly or very highly susceptible to these hazard as identified in hazard maps and in localities with significant antecedent rainfall.

Due to the Southwest Monsoon partly influenced by KARDING, occasional rains are also possible beginning today or tomorrow over most of Southern Luzon (including Metro Manila) and Visayas, especially over their western sections. As such, the issuance of Weather Advisory for Southwest Monsoon is not ruled out.

Strong winds (strong breeze to near gale strength) will be experienced within any of the areas where Wind Signal No. 1 is currently in effect.

Per latest track and intensity forecast, the most likely highest wind signal that will be hoisted is Wind Signal No. 3. However, with the possibility that ‘Karding’ will reach typhoon category shortly before making landfall, the hoisting of Wind Signal No. 4 in some areas over the eastern section of Northern or Central Luzon is not ruled out.

A preceding northeasterlies and the approaching tropical storm may bring moderate to rough seas (1.5 to 3.5 m) over the seaboards of Northern Luzon today.

Sea conditions is forecast to worsen tomorrow, with the seaboards of Northern Luzon and the eastern seaboard of Central Luzon experiencing rough to very rough seas (2.8 to 6.0 m).

A marine gale warning may be issued for these coastal waters within the day (at the earliest).

The aforementioned conditions are risky for most types of seacrafts. Mariners are advised to monitor for updates, take precautionary measures when venturing out to sea and, if possible, avoid navigating in these conditions during the said period.

‘Karding’ is the Philippines’ 11th tropical cyclone for 2022. It developed into tropical depression on Thursday, September 22 east of Central Luzon.

On average, there are 20 tropical cyclones that could form or enter the Philippine Area of Responsibility each year. Only half of those are projected to make landfall.